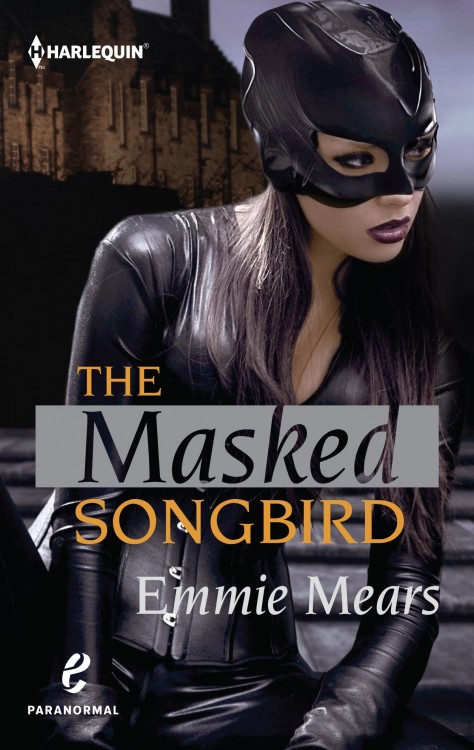 THE MASKED SONGBIRD,
by Emmie Mears

Sometimes, when you meet a random roommate on Craigslist and move in with them, they wind up stealing your food or refusing to take out the trash or throwing all-night ragers in your living room. And other times–if you’re reallllllyyy lucky–they become successful writers and bloggers who go on to found websites and publish books.

Emmie, as you may have guessed, is the latter kind of roommate. United by Craigslist, we bonded over our shared Celtic heritage, our love for Buffy the Vampire Slayer, and our aspirations to become writers. Although we no longer cohabitate, Emmie and I have kept in touch for years, and I couldn’t be more pleased to announce that her first book, The Masked Songbird, is being released by Harlequin in July! Set in Scotland on the eve of the Scottish Independence Referendum, the novel tells the story of Gwen Maule, a young woman who develops powers after she accidentally drinks a strange beverage.

Here’s Emmie to tell you a little bit more about herself, and her new book! Make sure to snag a copy of The Masked Songbird on July 1st–you can preorder it HERE!

1. Hello Emmie! Thanks for being here. I’m so excited to get my grubby paws on The Masked Songbird at last! Tell us a bit about the titular superhero, Gwen Maule. What is the quality you most admire in her, and what do you think is her biggest flaw?

Even at her worst, Gwen is nothing if not tenacious. I think that’s probably her best quality and one I try to emulate. She keeps trying even when things go wrong. Even when her life sucks, she keeps getting up in the morning. I think her biggest flaw is thinking she can do it all herself. In spite of her superpowers, she can’t be everywhere at once.

2. Aside from Gwen, who is your favorite all-time female superhero, and why?

I think I have to say Rogue. I sat quietly for a moment after reading this question, and her name popped into my head. She has to deal with some really overwhelming fear and obstacles, but she still pushes through. Even when she doubts herself, she manages to keep going. She’s spectacular.

3. The Masked Songbird is set in Scotland on the eve of the Scottish Independence Referendum. What made you choose this particular backdrop for the story?

I’ve always loved Scotland, and with the referendum coming up, it was constantly on my mind. I thought it could make an interesting external manifestation of the transition in Gwen’s life: the need to make decisions, to know yourself and what you want, to learn your own strengths and see where you can go.

4. Is travel important to you, as both a human and a writer? Where in the world would you visit, if you could go anywhere?

Travel is vitally important to me on both levels of humanity and writerdom. I wouldn’t be who I am without the stamps in my passport, and I’m still thankful that I was able to do that in spite of my rather poverty-stricken upbringing. If I could go anywhere right this second, it’d be Japan to visit my best friend Julia.

5. Finally, just for fun, pick any one fictional character to spend a day with. Who is it? Where would you go, and what would you do?

I just surprised myself, because Dean Winchester’s name popped into my head. I would happily spend the day with him fighting some monsters and capping it off with each eating our own pie. Blueberry. Because nom.

Emmie Mear, in the flesh!

Emmie Mears was born in Austin, Texas, where the Lone Star state promptly spat her out at the tender age of three months. After a childhood spent mostly in Alaska, Oregon, and Montana, she became a proper vagabond and spent most of her time at university devising ways to leave the country. Except for an ill-fated space opera she attempted at age nine, most of Emmie’s childhood was spent reading books instead of writing them. Growing up she yearned to see girls in books doing awesome things, and struggled to find stories in her beloved fantasy genre that showed female heroes saving people and hunting things. Mid-way through high school, she decided the best way to see those stories was to write them herself. She now scribbles her way through the fantasy genre, most loving to pen stories about flawed characters and gritty situations lightened with the occasional quirky humor. Emmie now lives in her eighth US state, still yearning for a return to Scotland. She inhabits a cozy domicile outside DC with two felines who think they’re lions and tigers.