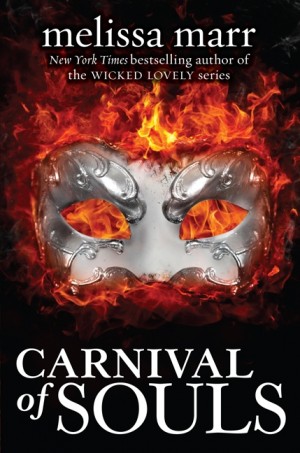 Meanwhile, all Mallory knows of the City is that her father Adam, as well as his witch brethren, fled to the human world after a terrible war between witches and daimons, and that she must protect herself from daimons at all costs. But when she meets a young man named Kaleb, she finds herself strangely attracted to him despite her father’s warnings that no one can be trusted. Can Kaleb answer her questions about her mysterious past? And does she even want to know what he has to say?

I was fairly disappointed with this book, mostly because of a few continuity and characterization issues that lessened the overall effect for me. The book is told from the point of view of four narrators; Aya, Kaleb, Mallory, and another daimon named Belias. The plot is fast-moving, switching between narrators and settings frequently, with a lot of action and intrigue. I thought the fight scenes were exciting, with plenty of blood and guts to keep the reader invested and interested. But besides speed, the plot had little else to offer. The competition-to-the-death storyline has been done many times before, and the romantic scenes between Mallory and Kaleb were predictable and stilted.

Overall, the characters were not very well fleshed out, with massive gaps between their intentions, their actions, and their reactions. For instance, Mallory has spent all seventeen years of her life training to fight daimons, yet when she finally comes up against one, she is completely useless and has to be saved by her witch father. Moreover, she is a massive whiner, despite the fact that she’s been brought up with a disciplined and spartan lifestyle dedicated to making her into a killing machine. Similarly, Aya is willing to destroy her own fiance in order to win the competition, despite the fact that she can move back and forth between the City and the human world, and has no trouble blending in with humans. Why doesn’t she just leave the City, which she hates anyway?

The final nail in the coffin was the ending. Even if a book is part of a series, I expect it to stand at least somewhat alone, with a good portion of the conflicts being resolved by the final chapter. This book fails to resolve any of the central conflicts, ending the novel with a blatant cliffhanger. There is no climax or falling action, and new information is being revealed right up until the final line. Unfulfilling, to say the least.

Two stars out of five, and I would be hesitant to read another novel written by Ms. Marr.