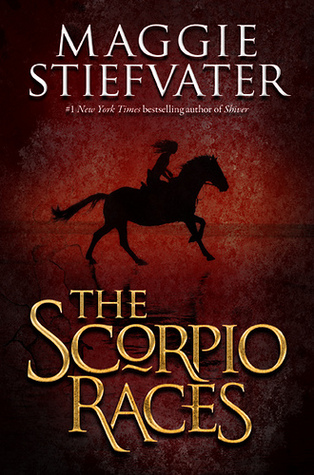 The Scorpio Races,
by Maggie Stiefvater

I discovered Maggie Stiefvater much later than everyone else. I would always see her first book Shiver while browsing at the library, but I’ve never been a huge fan of werewolves so I never checked it out. Boy, was I wrong. After reading this book, I believe that Stiefvater is one of the most talented YA writers out there at the moment, and I fully intend to add all of her books to my TBR pile.

The Scorpio Races takes place on a windblown island off the coast of Britain. Each year, throughout the month of October, vicious flesh-eating water-horses known as capaill uisce are drawn to the shores of the island. Those brave enough to catch and tame the horses compete in a race at the beginning of November, risking their lives for prize money and glory. Some live. Some die.

The book is narrated in turn by two young people, a girl named Puck and a boy named Sean. Sean has won the Scorpio races several years in a row riding his beloved red stallion Corr. But if he ever wants to own Corr outright he must win the race again this year. Puck was orphaned when her parents were killed by rogue capaill uisce, and she must fight every day to pay the bills. She will lose her family home if she can’t win the purse money, but she refuses to ride a water-horse, insisting that her sturdy dun pony will do just as well.

I really loved this book. The setting of the island was brilliantly drawn–I felt like I could see the white chalk cliffs rising up from the dark ocean and hear the shrieks of gulls in the dunes. The capaill uisce are described so evocatively, beautiful yet fearsome, with their long sharp teeth and their gleaming hides spattered with sea foam. I could understand how the islanders felt drawn to these strange, wild creatures, yet also how they were always wary of the horses’ taste for blood and longing for the sea.

Stiefvater has a masterful grasp on the language, and many times while reading I would stop and reread a beautiful sentence, struck by the lyricism of her words.

Days before the rain came, the clouds hugged the horizon and the ocean crawled high up on the rocks, hungry for the warmth of our homes.

The characters were sharply and poignantly drawn, their motivations clear and believable. The uneasy romance that blooms between Puck and Sean was much slower and subtler than in many novels of a similar genre, but no less engaging. Sean’s quiet strength contrasted well with Puck’s fiery obstinance.

I highly recommend The Scorpio Races to anyone who enjoys an atmospheric novel with elegant, understated language, deliciously eerie monsters, and crisp, believable characters.