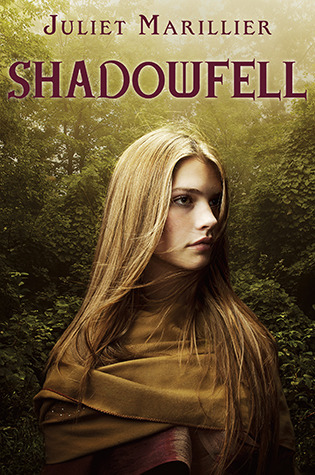 The magical land of Alban has fallen under the tyrannical rule of King Keldec, and Alban’s once generous and kind populace have become fearful and downtrodden. Once a year, the King’s Enforcers ride out on a Cull, killing everyone who dares speak out against Keldec while Enthrallers use mind-scraping techniques to turn anyone with useful magical gifts into pawns of the tyrant.

Sixteen-year-old Neryn is graced–or cursed–with the canny gift of Sight; she can see the Good Folk even when they seek to hide themselves from mortal eyes. But because of her gift she has been forced to lead a life of danger and worry, constantly moving from one place to the next with her father in order to escape the long arm of the King’s Enforcers. And when her drunken father gambles her away to a stranger for a handful of silver, she fears that everything is lost. But the stranger reveals himself to be a mysterious warrior by the name of Flint who has no intention of harming Neryn. Now Neryn must make a choice: will she take her newfound freedom and find a place to hide out from King Keldec’s Enforcers permanently, or will she try to make her way to Shadowfell, a secret stronghold spoken of only in whispers? Can she trust Flint, or does he seek to betray her? And can she accept the terrifying destiny waiting for her at the end of her journey?

I have never read any of Juliet Marillier’s novels before, but I’m glad I picked this one out at the library. Shadowfell was an enjoyable read for me; it reminded me of the fantasy novels I loved so much as a young girl, with a magical kingdom and a mysterious warrior on horseback and a courageous heroine whose mettle must be tested before she can find her destiny. Alban is beautifully drawn, evocative of a modern Britain while simultaneously conjuring forth an more ancient time of Celtic myth, when magical creatures lived alongside humans graced with mystic powers and abilities.

The pacing was generally a bit on the slow side for me; a significant portion of the novel is devoted to following Neryn as she walks North toward Shadowfell. Her journey is arduous, and at times reading about it is as well. There are many descriptions of how exhausted she feels, and how she builds her campfire, and what meager portions she has to eat. However, these slower portions are frequently balanced with short periods of excitement; I would have perhaps preferred if the ratio had been reversed.

Marillier’s characters are beautifully drawn; Neryn is at first a reluctant hero, concerned only with saving her own skin, but as the novel goes on she becomes stronger and more willing to accept that she must play a role in saving her beloved country. The book is written from Neryn’s perspective, and I loved how deeply Marillier allowed us into her protagonist’s emotions and thoughts. But the true star of the novel for me was Flint. Flint is a brilliant character: incredibly conflicted, forced by fate to live in a land governed by increasingly confusing shades of grey. He is savage at times, tender at others, but throughout the novel he is inimically himself, contradictions and all. I literally couldn’t get enough of Flint, so clearly did Marillier craft his character.

Overall, I enjoyed this novel. It was a bit on the juvenile side for me; there was nowhere near enough romance or romantic tension, and I thought Marillier glossed over some of the darker aspects of her world. But for a younger fantasy reader I imagine this novel would be absolutely perfect!