I was just a girl when I saw him for the first time. Or maybe I should say: when he saw me.

A bright, hot day, the kind that makes your skin itch and your eyes squint. The sun shone white-hot in the pale, tight sky, limning the waves with gold and sending spears of light glancing upwards to dance across my skin. These days were rare, and wonderful: it was easy to forget the exact color of the sea in sunlight when the winters were long and grey and dreary. Now, the waves danced like translucent steeds across the stony beach, their foamy manes streaming out behind them in runnels of white.

My sisters and I danced in the surf…. 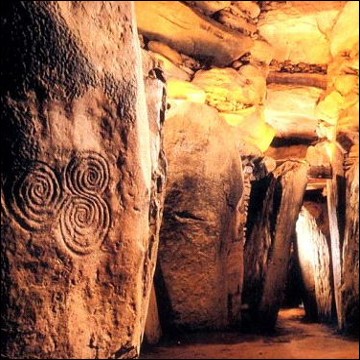 The Seeds of the Earth

The old man woke before the dawn, shuddering against the cold. Nightmares had wracked his sleep that night, the bedclothes tangling around his ankles and clutching at his wrists as he fought free of their grasp. They looked like pale serpents, and the old man shivered again.

He twitched the curtains open. The stars shone bright as diamonds despite the morning creeping up behind the mountains. The old man frowned: he did not know what had torn him from his bed so early. Closing his eyes, he felt deep within himself for the eternal vibration he had long ago learned to sense. His breath caught in his throat; the rumbling was restless and strong this morning. Too strong.

The mountain pass filled with grey light as the old man scrambled down the steep path; light enough for the his feet to find their way between the stones. He ducked into the low tunnel that twisted into the heart of the earth. The old man felt his way forward by touch and memory; he had traveled this tunnel more times than he cared to count.

When the old man reached the cavern he was frightened. The terrible grumbling in the earth spoke to him in a way that he did not understand; anxiety clouded his thoughts as foreboding clenched at his chest. Something was wrong.

The cluster of five massive rocks stood in the center of the cavern, equal in height and breadth, radiating with inner light. The old man drew in a breath of awe, as he always did; they had been there at the beginning, and they would be there until the end of the world. Tender love swelled his chest, but today it was tinged with a nagging worry. Waves of heat poured from the stones, terrific tremors shaking his bones until his teeth were chattering in his head. He laid a palm against the foremost stone, examining the ancient cracks, the pocked surface, the shards of mica.

The boy slipped from the shadows with barely a sound. The old man turned.

The old man was not the boy’s grandfather, but he was familiar with the nickname. All the children in the village called him Grandpa, Old Man Mountain, Grandfather Time.

“You should not be here.”

“Lady Weed told me who you are, and what you do. It is time, old man. Time for the mantle to fall to someone new.”

“You have no idea what you are asking for.”

“I do,” argued the boy, and the knife flickered in his fingers before he plunged it into the old man’s chest.

The old man fell to the floor, his vision darkening. He tried to force the words out: the manner of his death was wrong, his life must be freely given for the Guardianship to move on. Disaster was nigh. But his words gurgled in his chest: it was too late.

The boy moved towards the stones, and the earth began to shake with fury.

~Author’s note: This was originally published as part of a flash fiction contest at EmmieMears.com~

Lying in bed the night before his mother’s funeral, Felix Grant dreamed about the weird fishes.

Delilah Grant had been young and beautiful in the Seventies, a disco darling who slept days and drifted, hazy-lovely, through nights tight and bright with cocaine.

It hadn’t begun that way, of course. It never began that way.

She had been innocent once, with an easy smile and an unaffected prettiness that captivated those lucky enough to make her acquaintance. Her parents adored her; even her brother Jeremy grudgingly doted upon her. Yet no one was more proud than Jeremy when, by the grace of a gifted mind and a knack for impressing her elders, Delilah was released from the lacquered halls of Villa Theresa a year early. Wavering between a tour with the Peace Corps and a life of a coed at a prestigious university, the young woman chose the latter. She spent a summer by the shore, flirting with lifeguards and malcontent family men, and then she was off to the big city.

But Delilah Grant was too young for New York City…. 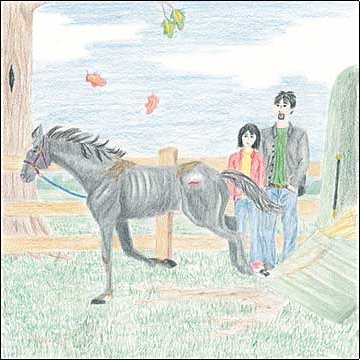 ~Author’s note: This story was written when I was thirteen, and published in the children’s literature magazine Stone Soup. I hope you enjoy this blast from the past.~

Daddy had said today would be our special day together. We would have gone to the movies and had pizza, but no, he was off rescuing yet another animal from its abusive owners. Couldn’t he have waited until tomorrow?

I walked outside and sat on the porch. I guess he couldn’t have waited. The poor animal was probably in terrible condition, judging by the rest of the animals Daddy and I had rescued. Daddy and I rescue abused pets and wildlife and bring them to our barn where we feed and heal them until they can be re-entered into their natural habitat or given new homes. Some of them have died, but most of them have survived. I always wonder what he’s going to bring back. Usually a dog or goat that had been treated terribly.

The fall leaves were just turning and I listened to the wind rustling through them as I thought about the importance of rescuing animals. Sometimes I just wished Daddy had a normal job, like a lawyer or something.

Suddenly a roaring noise interrupted my reverie and Daddy’s truck came hurtling into the yard with the horse trailer bouncing along behind. I jumped up and ran to the pickup as it slowed and Daddy jumped out. His hair stuck out at strange angles, and he seemed unusually flustered about it. I started to ask him about it, but he interrupted me.

“Fern! Go get a halter and lead rope and some hay. Go! Quickly!”

I ran, instantly recognizing the urgency in his voice. When I got to the barn I dashed into the tack room and grabbed Gypsy’s purple halter and the first lead I could find and gathered up some hay from Ben’s empty stall.

“I’m coming!” I called as I sprinted back to the trailer. Panting, I handed Daddy the halter and lead rope.

“I don’t need the hay right now, but I’ll tell you when I do,” Daddy said as he climbed up into the battered green trailer. “I may need some help up here.” I started to climb up but he motioned me down.

I pulled down the ramp and looked inside. I could just make out the outline of a horse.

I leaned in and handed the hay to Daddy. I faintly heard him murmuring to the horse. Coaxingly, he patted the horse on the neck. It calmed slightly, and Daddy, taking advantage of the moment, showed it the hay. It whickered faintly and began to nibble.

Gently, Daddy tugged on the lead rope. A big mistake. The horse shied and reared. It threw its head back, nearly banging it on the roof.

“Watch out, Fern! He’ll bolt now! Move!” Daddy yelled to me as he flattened himself against the inside of the trailer. I jumped out of the way just as the horse came charging down the ramp.

“Don’t bother chasing him. He can’t run very far. Watch.” Daddy had come down to stand next to me. But I was agape at the state the horse was in. He was barely discernable as a horse, covered in mud and caked dirt. A gaping wound on his hip slowly oozed blood. His emaciated body quivered as he slowed to a halt, chest heaving. His ribs showed through his hide. I couldn’t believe that someone would do something that horrible to an animal.

“Frizbee,” I murmured to myself. I walked slowly toward Frizbee. He swung his head around and watched me warily. I whispered to him and didn’t look him in the eye. The trick was to appear unthreatening. I walked up and slowly took hold of his lead rope. Wearily, he followed me to the barn.

I led him into Ben’s stall and took off his halter. I filled the bucket on the wall with warm water from the tack room sink and grabbed a sponge and the grooming box from the shelf and returned to where Frizbee was, standing in the exact same place I left him in. This horse needed some serious help.

I curried off the muck and treated the wicked cut on his hip and gave him a tetanus shot, just in case. I sponged off the sweat and blood and rubbed him down with a rag. I dragged out the extra horse blanket we had had ever since Splash died. I carefully placed it over him and buckled it. I softly patted him and went into the feed shed to make him some hot bran mash. When I came back, Daddy was standing by the stall, looking in.

“Good job, honey,” he said, hugging me. I glowed with pride.

As I fed Frizbee his mash, I knew that I had done something wonderful for him and that my whole life would be dedicated to helping animals regain the joy of life.