Hello, readers! Sorry for the hiatus, life sometimes rudely inserts itself into your carefully planned blog schedule. Check back Wednesday for a return to a regular posting schedule. 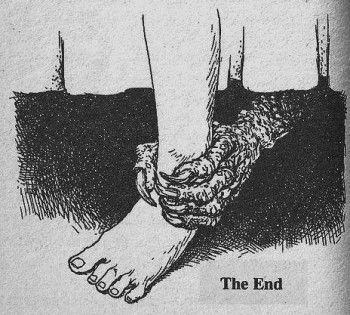 I should not have googled “under bed scary.”
*hides under covers*

When I was about eight, a babysitter (who had apparently not been briefed on my parents’ ban on all things violent and scary) told me a scary story at bedtime. It was a variation on a classic theme: a young girl is left home alone with no one but her faithful dog. She is woken in the middle of the night by the sound of a leaky tap in the bathroom, but is too frightened to get up and shut it off. She reaches down to her dog, who licks her hand in reassurance. She drifts off to sleep. When her parents arrive home the next day, they find their daughter murdered in her bed, and her faithful dog gutted and dripping in the shower. A cryptic message is scrawled across the wall in blood: Humans can lick too.

With the wisdom granted by adulthood, I can now see that there are some glaring inconsistencies in this story. For instance, why would the murderer slay the girl’s dog and then hide under her bed for an indeterminate amount of time? Was he hoping for the opportunity to lick her hand? Did the message hold some kind of significance for her parents, and if not, why bother writing it? Neither the cleverest nor the most original tale, I’m afraid. But despite all that, I can say with complete honesty that this story terrified me.