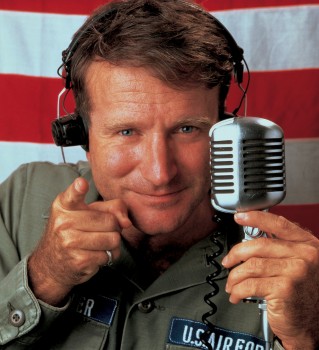 I don’t usually blog about current events, much less celebrity deaths. When the newspapers are filled with school shootings and police shootings and dead Palestinian children and natural disasters, spending time mourning a famous person seems worse than trivial.

But it is a queer thing to cry for a stranger. To feel tears running down your cheeks and an ache in your chest for someone you never met, someone you only know through their on-screen performances. To feel genuinely heartbroken about the suicide of a famous person. But that is how I feel about Robin Williams’ death, and if the lachrymose outpouring on social media is any indication, I’m not the only person grieving for the late actor and comedian.

I never met Robin Williams, but he was a fixture in the pop culture of my childhood and an icon for my generation. He outran a stampede of animatronic jungle animals in Jumanji. His manic, ebullient, and mercurial voice-acting brought Genie to life in Aladdin. He hilariously cross-dressed as a Scottish nanny to spend time with his children in Mrs Doubtfire. And when I was older, he sat on a bench in the Boston Public Garden and said to a young and arrogant genius, “You’re just a kid. You don’t have the faintest idea what you’re talkin’ about.” He taught a group of young men about loving literature, about standing up for what they believed in, about seizing the day. “That the powerful play goes on, and you may contribute a verse.”

And that’s just to name a few.