Sometimes life gets a little crazy. Metaphors abound: roller coaster, whirlwind, upheaval. But all these words pretty much mean the same thing; sometimes the way things happen isn’t the way you expected them to happen. And more often than not, those things happening can get in the way of other things happening, namely important things like work. 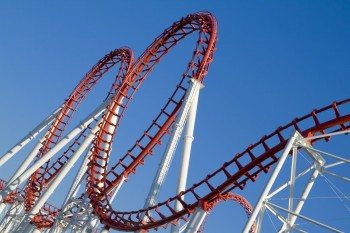 Whee! Now let me off.

The past four months or so have been a little bit like that for me. We moved halfway around the world, back to the good ol’ US of A after spending 2+ years abroad. Reverse culture shock, anyone? Then there was traveling to visit family and friends. And when we finally got “home” we had to set up our new apartment from scratch. And I mean that literally. No furniture, no pots or pans, not even salt and pepper to season our sad frozen pizzas. Husband started his new job and promptly left town for three weeks, and he had hardly returned when I left town for another three weeks to help with some family stuff in Florida.

You get the picture.

Unfortunately, this kind of whirlwind lifestyle doesn’t suit me. Or rather, it doesn’t suit my work schedule. I used to abhor the very idea of routine, but the past few years have taught me that routine is not only my friend, but my primary ally in the fight against all things anti-work: procrastination, distraction, and more procrastination, to name a few. In fact, the only way I ever get anything done is through following a fairly strenuous routine. And when that routine is taken out back and shot? Well, let’s just say I don’t get much work done.

END_OF_DOCUMENT_TOKEN_TO_BE_REPLACED 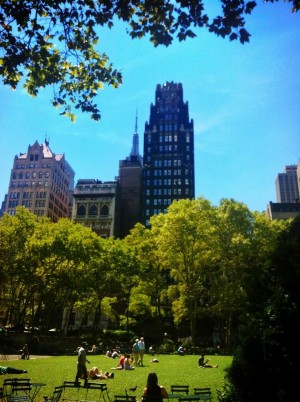 This past weekend, I took the bus from Boston to New York City to meet up with my husband, who was there for work reasons. Now, I know this probably isn’t the most common view in the world, but I kind of hate NYC. I’ve never lived there, but I usually find myself visiting once every couple years, and every time I arrive with high hopes and depart feeling angry, stressed, and overwhelmed. I hate the ubiquitous skyscrapers that block out the sun, darkening the streets even when skies are blue. I hate the garbage piled on sidewalks; the smell of piss and trash in alleyways; the scaffolding and construction on every other street. And most of all, I hate the crush of humanity elbowing me aside, reminding me that I am nothing, as important as a single drop of water in a vast ocean. In New York, I am anonymous, meaningless, and hopeless.

But something about this visit was different. Maybe it was because the weather was perfect. Maybe it was because we had no stressful itinerary, nothing we had to do or see or visit. Maybe it was because we avoided Times Square like the plague. But for whatever reason, I actually enjoyed myself in New York City. Relaxing in Bryant Park, I could close my eyes and hear the rhythms of New York: the steady heartbeat of a million footsteps on pavement; the thrum of a thousand subway trains rushing through underground tunnels; the syncopated beeping of hundreds of impatient yellow cabs. Gazing at the skyscrapers, I didn’t see ugly monoliths but the syncretism of history, architecture, and industry. Instead of a pockmark on the face of a nation, I saw instead a beating heart, vital and alive.

I wasn’t always a city girl–I grew up in a small town in the South. But since I graduated college I’ve lived in Washington DC, London, and now Boston. I’ve come to love cities, with their contradictory personalities and fast-paced cultures. And the longer I’ve spent living in cities, the more I’ve realized that each one has its own identity, individual and unique. They are like people, complicated and hypocritical and beautiful, and you never stop learning new things about them.