Happy Monday, everyone! I don’t know about everyone else, but we’re having some gorgeous Spring weather here in London, and I couldn’t be happier!

I finally got to the theater to see The Hunger Games. I read Suzanne Collins’ epic trilogy in the space of a single week last year, and was blown away by her lush descriptions, heart-racing pace, and heart-breaking characters. While I had a few issues with the movie adaptation, overall I felt the director remained faithful to the book in all the right ways.

One of the most powerful moments in both the book and the movie is the pivotal sacrifice at the beginning: Katniss volunteers as Tribute in the place of her younger sister. This act of self-sacrifice sets the events of the book and movie in motion, and allow Katniss to bloom as a strong, powerful and heroic character. 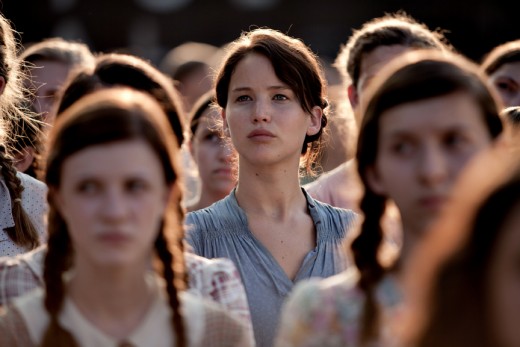 I love me a strong female protagonist!

But Katniss’ sacrifice got me thinking about other sacrifices. I remember my high-school boyfriend once saying that for him, the definition of true love was “sacrificing your life for someone you care about without them ever knowing what you had done for them.” As a lover of books, movies, and good TV shows, I have seen sacrifice presented in a hundred different ways with a hundred different characters, but the act of sacrifice never becomes less compelling. So, I’ve decided to do a three part installment series regarding sacrifice in pop-culture. Today, I’ll talk about the way sacrifice is presented in Harry Potter. Later in the week, I’ll discuss Buffy and Firefly, Supernatural, and maybe even something else!

Please be warned, SPOILERS DO FOLLOW, so stop reading now if that offends you.

These books are so chock full of sacrifice that I couldn’t even begin to cover every instance. Sacrifice for love, sacrifice for honor, sacrifice for redemption; these books do it all. I’d like to focus on two characters, Harry Potter and Severus Snape.

Harry is the clear hero of this franchise. I don’t think anyone was surprised when it turned out that in order to destroy Voldemort once and for all, Harry was going to have to sacrifice his own life.

And he’ll do it with his jaw set, too.

For those of you who know me well, you’ll know that I think Harry spends most of the series being a bit of a shit. I think this was done intentionally by Rowling, who understands that a true hero rarely actually wants the life he is forced to lead. What’s the saying? Heroes aren’t born, they’re made. Harry’s is certainly a heroic sacrifice; he lays down his life to save his friends, his society, and presumably the world. But it is also a redemption; a true moment of selflessness at the end of a long road paved with a good deal of whining and acting out. Harry becomes a hero in that moment, and not a second before.

Severus Snape’s sacrifice also takes the form of a redemption, but it comes at the end of a long road paved with mistakes and pain. Snape was never a hero–even as a child he was selfish and weak, and when these tendencies followed him into adulthood, he made a number of unforgivable mistakes. But when the love of his life died, he made the choice to become a double agent for Dumbledore against the Death Eaters. It was not an easy choice, and I don’t think it ever got easier for Snape. He was a suspected Voldemort sympathizer for years. The child of his love, Harry, loathed the sight of him and went out of his way to be cruel to him. He was forced to kill his only friend in the world, Dumbledore, when the great man asked him to. Snape never got a happy ending, and his sacrifice was only recognized after his death. But he got redemption.

Which are your favorite moments of sacrifice in Harry Potter? Comment below, and make sure to tune in for tomorrow’s installment, Sacrifice:Part II-Whedon-verse, where I’ll talk about Buffy, Angel, and even Firefly!