Back when I was a semi-avid rock-climber (which mostly involved sitting around and watching more talented climbers climb) I noticed that climbers would refer to beta when discussing climbing routes. As the story goes, the term originated from one famous climber, Jack Mileski, in reference to an old videotape format replaced by VHS.

Who knew climbers could be so clever. Basically, beta is a way of mapping out problems, adjusting for difficulties, and achieving the greatest flow of movements from one position to the next. It can be a community activity, sometimes, with several climbers helping each other out with the appropriate beta for a particular route. 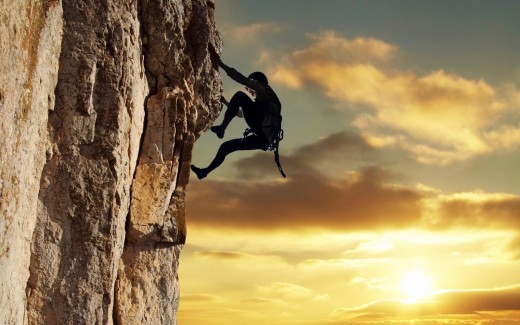 I was not this good. Image via unpics.com

As I become further embroiled in the dark underworld that is trying to become a writer, I have learned about a different kind of beta. Beta-readers are other writers kind enough to read your manuscripts or drafts with a critical eye for grammar, syntax, continuity and characterization. They provide valuable insight into things that you, as the author, may be too close to see. Apparently these useful, friendly gremlins are also known to some as critters, from the French critiquer. So, beware: if you ever beta-read for me, be prepared to be called a critter.

But the climbing beta and the reading beta aren’t so different, methinks. Often, when you’re up on the wall, you’ll ask another climber for help with beta, because you’re so close to the damned wall that you can’t actually see where you should put your feet, or where the best handgrip is, or even which direction the climbing route is going. In similar fashion, a beta-reader is great for spotting plot-holes, reminding you that you completely dropped a character after the first chapter, or telling you that you are simply headed in the wrong direction.

It’s also great to have someone who can tell you exactly why something isn’t working. As much as I love the family and friends who are more than happy to read my manuscript, and as affirming as it can be to hear how much they like it, it can also be frustrating. Sometimes when I ask how to improve the responses fall into the “I’d like it if it were better” camp.

But thanks to the careful and detailed notes of my new beta-reader, Emmie Mears, I am well on the way to a sparkling third (ugh) draft (and not falling off the metaphorical rock-wall)! Here’s to taking one more step towards the dream!

Do you have a beta-reader (or someone who helps you with your work, if you’re not a writer)? How do you tell when and why something isn’t working?