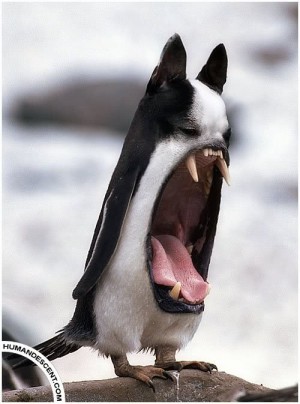 As I was wasting time on the internet last night, one thing led to another (as so often happens when the interwebz is involved) and I found myself google image searching ‘weird animals.’ And let me tell you, I highly recommend it. Go ahead, I know you want to. I’ll wait.

What entertained me so much about this motley collection of weird animal pictures, you ask? I’ll tell you. Interspersed among the usual plethora of star-nosed moles and abyssal sea cucumbers are all these photoshopped pictures of hybrid animals not actually seen in nature. Squeagles. Duckodiles. Labrangutans. I have no idea who created these images, but they are amazing.

And after I was done laughing my head off over these absurd creations, I started thinking about hybrids in mythology, folklore and literature. Representations of both human and non-human hybrids have existed since the Late Stone Age, and deities and beasts in Assyrian, Egyptian and Greek mythologies were often portrayed as having both human and zoomorphic traits. The Sphinx, with a face of a woman and the body of a lion. The gods Anubis and Horus had the heads of a jackal and a falcon, respectively. Pagan religions also often depicted their gods and goddesses as either being part animal or having animalistic affiliations. And in our modern genre culture, werewolves, other were-creatures, and shape-shifters are nearly as popular as the omnipresent vampire. 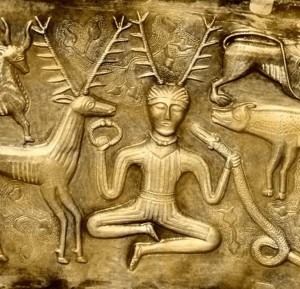 Cernunnos, the Horned God.
Relief from the Gundestrup Cauldron

The list of human and non-human hybrids in mythology, folklore and pop culture is nearly endless. But what does it say about the human experience that these hybrid creatures are so ubiquitous in our lore? What universal theme in the collective imaginary is represented by these creatures that are part human and part beast?

Like vampires,  often the hybrid in literature reflects human anxiety. Not about the outside world, changing constantly around us, but about the world inside, and the dark spaces in our souls that we have been taught to hide away and fear. Lustful thoughts. Unwarranted hatred of other people. The desire to do physical violence to the people who anger or injure us. But ethics tell us these instincts are not right; they are not human. So to rationalize them, we reflect them outwards as animal traits. 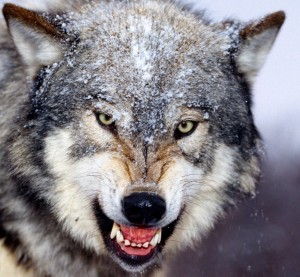 The werewolf is a great example of this externalizing of internal anxieties. In traditional werewolf lore, when the moon is full a person who has been bitten by a werewolf will himself turn into a wolf (or wolf-man hybrid) against his will and be transformed into a rampaging beast, unable to control himself. He is unaware of his own actions; he could savage his neighbor, slaughter a friend, murder a child. For one night, he loses his humanity completely; the animal lurking inside him literally takes over his body.

The metaphor is almost painfully obvious. Any time someone loses control of themselves, or lets their primal instincts take over, the werewolf is being evoked. The alcoholic. The abusive spouse. The short-tempered boss. The presence of the full moon in the myth is also significant; in previous eras, the full moon was believed to cause mania, resulting in higher rates of suicide, rape, and murder. 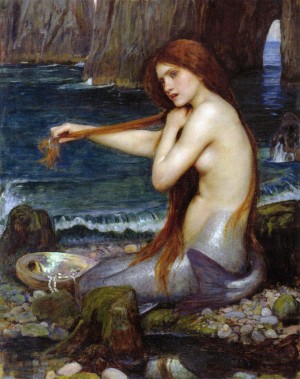 “I’ll keep my voice and my tail too,
thanks soo much…”
Painting by J.W. Waterhouse

The animal traits of hybrids in mythology can represent other things as well. Satyrs, with their goat legs, horns and beards, lustfully pursuing any fair maiden unlucky enough to pass by. Horny, literally and figuratively. Centaurs, with the arms and chest of men but the hindquarters of horses, also represent the conflict between civilized humanity and baser appetites–they are usually shown to be warlike and violent, prone to kidnapping nymphs or virgins for their pleasure. Even mermaids, half woman and half fish, can be seen to represent both the danger and the allure of the sea to mortal men; with their seductive but dangerous singing voices they cause boats to run aground on hidden rocks, or they call up wild storms to drown hapless sailors and drag them into the depths. 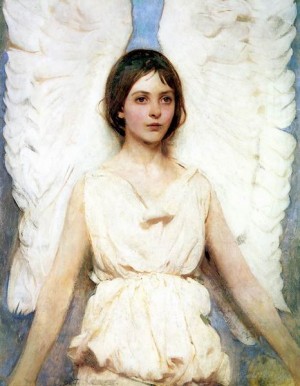 Even angels are visually represented as human-animal hybrids, beautiful men and women with giant fluffy bird wings. But in the case of angels, I think the zoomorphic trait represents two things different from most mythological hybrids. First, the deep yearning in all human beings to fly. And second, a spiritual transcendence commonly associated with ‘the heavens,’ up above, where things with wings fly beyond our reach. Even as our basest desires are represented by beasts with teeth and horns and hooves, our aspirations for spiritual purity and ascension are represented by wings, the tools of flight that keep us grounded, earthly, mortal.

Do you like reading about hybrids in mythology and fiction? What about their traits do we as readers find compelling? I’d love to hear your thoughts in the comments below!

What are some advices to identify solid internet pharmacies