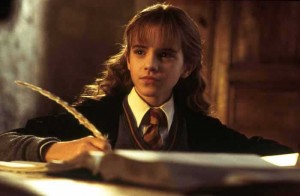 Yeah, this was totally me.

Writing always came easy for me. When most kids my age were still struggling with mastering proper spelling, I was already scribbling away at elaborate fantasies inspired by the chapter books I checked out from the library. I wrote in my diary nearly every day, recounting adventures at school and cataloguing my dreams and aspirations (I wanted to be a vet and/or jockey, in case you were wondering). In high school, English was inarguably my best subject; I glowed with pride whenever my teacher read my essays aloud in class and jumped at the chance to complete creative writing assignments for extra credit.

But it wasn’t until I took an elective creative writing class in college that the idea of “being a writer” really took hold. The other students in the workshop were impressed with my writing; one girl said my style was “Fitzgeraldian” (considering F. Scott Fitzgerald was my favorite author at the time, this rated as high praise) and the professor said “the rhythm and pacing” of my prose was “exquisite.” (Other comments hinted that my prose tended to be purple and my plot lines were derivative. I chose to ignore those comments.)

“That which we call a…nope, I got nothin’.
This poet shirt must be defective.”

And somewhere between one short story by Tobias Wolff and another by David Foster Wallace, an idea took hold: I could be a writer. I could put my innate talents to use and craft genius, wonderful, lucrative stories for a living. And so it began. I gleefully penned my first few short stories, and incubated the idea for my first novel. And then I wrote my first novel. My first novel! I had arrived!

I won’t lie: visions of sugarplums (or more accurately, six-figure book deals) danced in my head. But it wasn’t long before I realized the truth: that vision couldn’t have been more naive.

You see, what I didn’t realize at the time was that the name of the writing game is persistence. I have since learned that being a natural writer doesn’t go far in this industry. Kameron Hurley recently wrote an amazing post on Chuck Wendig’s Terrible Minds blog about this very subject. She details the long, grueling, and often unrewarding trials of what she calls the “long con of being a successful writer.” Most authors–including those who have topped bestseller lists multiple times like Stephen King and J. K. Rowling–spend years, if not decades, perfecting their craft and navigating the complicated and fickle world of publishing. The rare “overnight success” is just that: an anomaly, a beautiful rainbow-maned unicorn that many will search for but few will ever find. 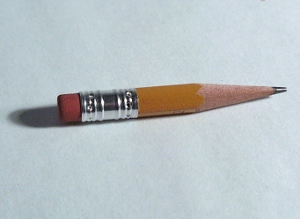 This pencil stub is a metaphor.

My friend, fellow writer, and erstwhile roommate Emmie Mears recently had her female superhero novel Shrike acquired by Harlequin. This is fantastic news for Emmie–she has worked incredibly hard over the past few years and absolutely deserves to see the fruits of her labors. But in a way, I feel like Emmie’s success is also a win for me, and all the other writers I know who keep plugging along every day, chipping away at word-counts and sending out countless query letters. It’s a win for the people who don’t give up. It’s a win for persistence.

If someone had told my child self, teenager self, or even college-student self about how long, difficult and frustrating this journey would be, I might not be here today. But then again, maybe I still would be. I can’t say for sure. And I’m still learning to deal with the fact that this dream isn’t going to come true overnight: my sugarplums might be moldy prunes by the time anything big happens for me. But if Jo Rowling can do it, and Emmie Mears can do it, then maybe I can too.

There’s now a yellow sticky note on my laptop. You know what it says? Persistence.