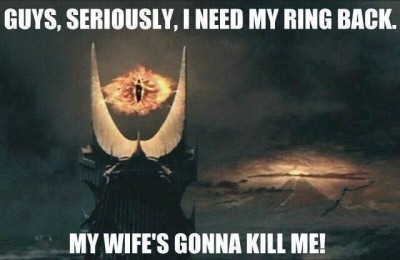 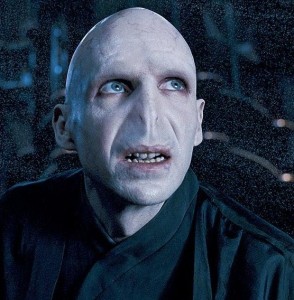 Maybe he’s born with it.
Or Maybe it’s Maybelline.

Let’s look at another widely-known villain for a moment: He-Who-Shall-Not-Be-Named a.k.a Voldemort. Throughout the seven volumes of the Harry Potter saga, Voldemort is transformed from a faceless shadow (physically and metaphorically) into a complex antagonist with a intricately drawn backstory and complex motivations. Rowling makes a point of making Voldemort real. Yes, we still hate Voldemort. Yes, Voldemort is still evil. But we as readers at least have an idea of why. We know what factors surrounding his birth, childhood, adolescence and adulthood shaped him into the paragon of evil Harry faces at the end of book seven.

Now, I haven’t read The Silmarillion or any of the other volumes that together make up the Middle-earth mythology. My reading of Tolkien has been confined to The Hobbit and The Lord of the Rings trilogy. So it’s entirely possible that Sauron has a complex background to explain his raging evil-ness that I just don’t know about. But if you ask me, Sauron’s a bit one-dimensional to really qualify as a true antagonist.

So who’s the real villain in The Lord of the Rings? How about Saruman the White, who betrayed his wizard order for dark power? How about the One Ring, an inanimate object with a mind of its own? How about the greed of humanity? Or–let’s be honest–the gross incompetence of the fellowship, most notably Gandalf?

Do you think Sauron is a good villain? Do you have any favorite sympathetic villains? Leave your thoughts in the comment section below!