Yeah, there’s no way Molly ever got around to
home-schooling this brood.

Harry and all the other witches and wizards admitted to Hogwarts get their letters of acceptance when they’re eleven. We know that Harry and Hermione and other Muggle-born students went to Muggle elementary school before attending Hogwarts, so presumably they possess 5th Grade reading, math and science ability levels. There isn’t much discussion of Pureblood wizard schooling prior to Hogwarts; there appears to be no official precursory education for magical children. It’s entirely possible (let’s be honest: probable) that the Weasley children spent the first eleven years of their lives rough-housing and playing in the dirt with no tutelage to speak of. And even if they did go to elementary school, it is doubtful that they would have been taught Muggle skills such as math, science, or world history.

Once young witches and wizards are at Hogwarts, all their classes involve magic. Charms, Transfiguration, Potions, Defense Against the Dark Arts–absolutely no general education classes to speak of. No Wizarding Language and Composition, no Wizard Calculus, no Wizard Biology. Only Hermione takes any classes resembling general education, and everyone derides her for it. The only conclusion I can draw from this education system is that each and every wizard graduating from Hogwarts possesses at best a 5th grade reading level, zero grasp of algebra or complex mathematics, and no knowledge of human biology, earth geology, or environmental ecology. 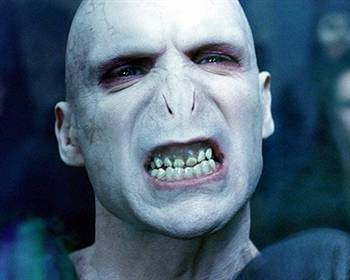 “Gosh, we thought this was a normal stage
in human larval development.”

And then all these functionally illiterate witches and wizards go straight into careers running the wizarding world. J. K. Rowling makes no mention of wizarding universities; following completion of a Hogwarts education there is no standard tertiary education to speak of. I imagine that Healers and Aurors, for example, would require some extended professional training, but I doubt that includes advanced reading skills or arithmetic.

And so you have it: every year semi-literate seventeen-year-olds with practically no knowledge of anything but how to cast Jelly-Leg jinxes and transfigure teacups into gerbils enter the Wizarding world as functional adults, ready to embark on complicated and dangerous careers. And to that I say: God help us all.

Look out on Wednesday for Part II of my Harry Potter and the Illiterate Wizards series, in which I’ll discuss the absurdity of Wizarding interests in a global economy.