I’ve been thinking quite a lot recently about my penchant for fantastical aesthetics and surrealistic landscapes, and what, if any, part my upbringing may have had in inculcating those preferences. 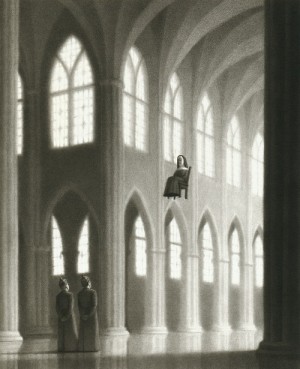 Chris Van Allsburg was one of my favorites.

I was always a creative child, and that creativity was fostered by my parents sending my to Waldorf School, where art, music and all things creative are inseparable from the instruction of less artistic skills like history and mathematics. I also loved reading, even before I could read on my own–my parents used to read to me before bed every night, lush picture books, C. S. Lewis, and later, the Prydain Chronicles and His Dark Materials. And once I could read on my own, I devoured books. Just to give you an idea of my voracious literary appetite, my sixth grade English teacher challenged my class to read and track 50 books over the course of the school year; imagine her surprise when I turned in my list after barely a month and asked for another sheet on which to keep track of my reading. 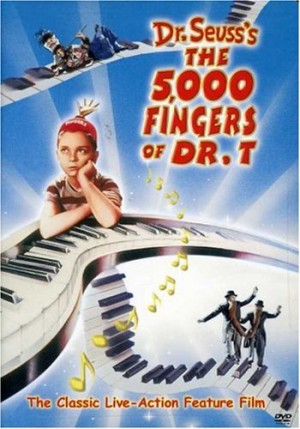 But among all the amazing art and fiction I consumed in my childhood, one particular thing stands out as having had a huge impact on my delight in all things phantasmagorical. That thing is a musical film, entitled ‘The 5,000 Fingers of Dr. T.’ Released in 1953, the movie is created and written by Theodor Seuss Geisel (better known to the world as Dr. Seuss) and is the only live action feature film Dr. Seuss ever created. And did I mention it is a musical? Featuring a bizarre fantasy world right out of one of Seuss’ picture books, the film follows a young boy by the name of Bart Collins, who stumbles into a nightmare world where his strict piano teacher, Dr. Terwilliker, rules with an iron fist. 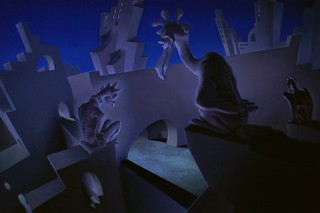 At the surreal Terwilliker Institute, Dr. Terwilliker is an autocratic madman bent on ruling the world through piano music. The grand hall of the institute features a massive 500 person piano, on which Dr. T intends to force Bart and 499 other boys (hence the 5,000 fingers) to play with no respite. Furthermore, Dr. T has imprisoned all non-piano-playing musicians in a vast subterranean dungeon, where he systematically tortures them for no better reason than they picked the wrong instrument. And worst of all, Dr. T has used his ominous powers to hypnotize Bart’s beautiful mother, Heloise, into being his assistant and bride-to-be!

Bart, desperate to escape from Institute and free his mother from under Dr. T’s maniacal influence, goes to the resident plumber, Mr. Zabladowski, for help. But will the pair of them defeat Mr. T before it’s too late? They will have face off against roller-skating twins conjoined at the beard, masked dungeon guards and  various other Seussian villains first! 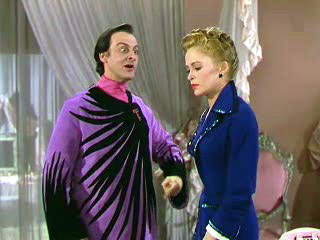 Dr. T berating his fiancee while displaying
his sartorial excellence.

I love love loooooved this movie as a kid. I think my mom found it at the library, and once we discovered that the film was out of print, we never gave it back. I’m not kidding. Sorry Alachua County Library District, I stole your movie. That’s how much I loved this terrifically weird film. I watched it literally over and over. My best friend, Talia, would sleep over and we’d watch it and sing along with all the songs. At one point I think her mom was genuinely worried about how obsessed we were with it.

Because it’s really strange. Part wholesome ’50’s children’s movie and part nightmare-ish journey to the edge of madness, this movie really doesn’t fit into any known genre. Sixty years later, some of the songs are quite corny and the writing is a bit dated, but if you actually pay attention there’s a ton of brilliantly bizarre stuff going on. At one point Bart accidentally stumbles into the cavernous dungeon where Dr. T keeps all his non-piano-playing musician prisoners, and they put on an impromptu symphony, complete with tattered tuxedos, fuzzy rainbow-colored mittens, and assorted Seussian instruments, all of which are completely fictional. If you’re starting to think this movie sounds like a bad acid trip, you’re not far off. I’m not tech savvy enough to embed this video, but you can find a clip of this scene here.

And here’s a line from the ‘Dungeon Song,’ sung in a creepy baritone by an oiled-up hooded dungeon master transporting Bart and Mr. Zabladowski to the dungeons:

I mean, wow. This movie was intended for kids. And they say children these days are exposed to too much violence in the media.

Anyway, if you ever get a chance to see this movie, I highly recommend it. I finally found it on DVD a few years back, so if you ask nicely I might even lend it to you. And if you’ve ever wondered why I get a kick out of bizarre humor and surrealistic landscapes, now you have your answer! I’ll leave you with this gem until next time….

Do you have any favorite childhood movies that influenced your aesthetics as an adult? I’d love to hear about it in the comments section below!

How to find legitimate online drugstore or webservice